In September 2015, ACC Minister Nikki Kaye announced that the residual levy will be removed from the Work, Earners’ and Motor Vehicle Accounts in April 2016.

The residual levy was introduced to catch up the downstream cost of old claims when ACC made the switch from a ‘pay as you go’ to the ‘flat fee’ scheme we know today. This ensured that there was enough money to cover the costs to pay for ongoing claims predated from 1999 when the change was in place.

What does this mean for levy rates?

ACC has continually adjusted the current portion of the work levy to ensure that both the cost of claims during that year and historic claims are covered. This means that when the residual levy is removed, levies do not automatically decrease. Changes to work levy rates are dependant on a businesses levy risk group and how its performance has changed since 2005.

ACC has released the anticipated levy rates for 2016/17 and from looking at current and prospective client’s levies, increases between 5 and 300% have been seen.

What does this mean for Accredited Employers?

Over the last three years, projected future claims costs have decreased. This has led to a decrease in the work levy and narrowed the gap between the residual levy and the total levy.

This has led to the ACCPP being a less attractive option to employers as the savings of being in the programme has barely outweighed the risk involved in taking responsibility for their employees injuries.

With the removal of the residual levy, accredited employers will no longer be paying this portion which will lead to far greater savings.

How will Accredited Employers benefit?

The graph below is an example based on a client in the ACC Accredited Employers Programme. With the residual levy, the employer is saving only on the work levy section of their invoice. This means that even if their overall standard ACC levy rate is higher with the residual levy, the savings are not as significant. With a total ACC levy of $654,500 and savings of $346,500.

When the residual levy is removed this client has seen a reduction in their overall ACC levy rate, however the savings made are applied to their entire levy. This gives them a total ACC levy of $577,500 with a saving through the ACC Accredited Employers Programme of $519,750. 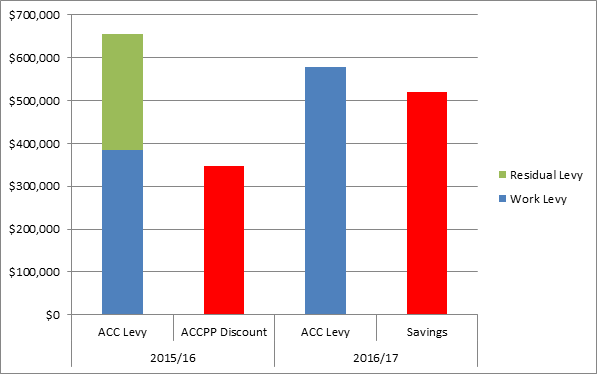 If you would like to know how these changes and the current levy rates effect your business, please contact us.